THE INFINITE MONKEY THEOREM FOR THE DIGITAL AGE

A monkey sitting at this website for infinite amount of time would eventually create the full works of Leonardo DaVinci and Ruby – The Painting Elephant.

THE PIXEL MONKEYS THEORY
A monkey clicking the “render” button on this website for infinite amount of time would eventually generate every image that has ever been and ever will be.

A pixel is the smallest item of information in an image. The image below is 50 x 50 pixels and composed of 2500 pixels of varying colors. The random pixel generator is a computer program that creates a pixel and attributes a randomly selected color to it. The program repeats this task until an image of the user’s specified dimensions is created.

Because of having the potential to create any possible image, some think of the random pixel generator’s output as “God’s Imagination.” By no surprise, “God’s imagination” consists mostly of indiscernible static. In fact, any image has the potential to be generated, from your own driver’s license photo, to an image of an alien creature having tea with a miniature penguin wearing a party hat, or even a horrific crime scene.

HISTORY OF THEORY
The classic Infinite Monkey Theorem states a monkey sitting in a room with a typewriter for an infinite amount of time would eventually create the full works of William Shaekespeare.

The idea of applying the infinite monkey theorem to pixels came to artist, Matt Kane, at age 12. He was sitting in junior high school mathematics class during a lesson in x-y vectors. Two years prior, the the idea of an “every image possible” program began as a thought experiment to the 10 year old after noticing in Microsoft Paint that photos are composed of pixels. In 2008, eighteen years after first conceiving of the idea, Kane began this website, creating the internet’s first interactive random pixel generator.

Part of the goal for this website is to realize this idea and allow playful exploration of the theory.

HOW LIKELY IS IT THAT A RECOGNIZABLE IMAGE IS GENERATED FROM RANDOMNESS?
Not very likely at all. Even at a relatively small dimension of 320 pixels wide X 240 pixels high, using 256 colors, there are more image possibilities than there are atoms in the universe. 256^76,800

More than not, an image will look like this: 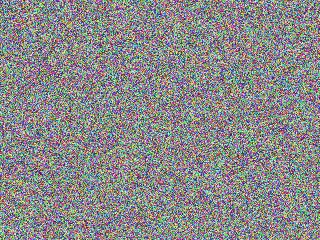 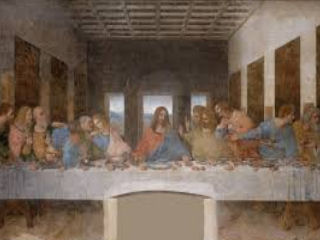 INCREASING THE CHANCE OF CREATING A RECOGNIZABLE IMAGE
The random color selected for a pixel is chosen from an array, or list. By taking an image and counting how many times a color is used, one can create a color array that increases the chance of creating that image.

Using this color frequency list over a list simply consisting of 1 of each color highly increases the probability of generating Mario’s head or images similiar to Mario’s head.

Mario is a registered trademark of Nintendo. We are not affiliated with Nintendo. The image of Mario is copyrighted by their respective creators and developers.